Defining the term “speaking in tongues”.
A gift of the Spirit that anointed Christians may possess.
When, where and how it occurs in the Christian Church. 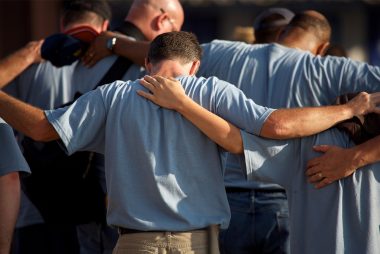 Please quickly read the article, “Experiencing the Holy Spirit” that introduces this subsection, “Gifts of the Spirit” on the website.

Another article, “Is this Spirit stuff real?” explains how we can analyse and evaluate the ‘manifestations’ of so-called “anointings” and “gifts” to recognise their genuineness. I have no doubt that this stuff looks – to anyone who has had no contact with this area of the Christian Church – like it came from planet Mars! But it actually began in the first century, as documented in the Bible, and it is again happening now.

And I admit it still amazes me. This whole website has been developed by an analytical minded person – a now retired, experienced, qualified and senior auditor – over a period of many years. I must add that it happened with the help of a supporting team of qualified advisors. For the who’s, how’s and why’s of this website please click here.

This particular article discusses the common gift of “speaking in tongues” given to Christians, in the Pentecostal/ Charismatic movement. That is to people who have been touched (‘anointed’ or ‘filled’) by the Spirit.

Now God may be invisible to us, but he is clearly willing to prove to each of us that he does exist, through the manifestation of his gifts as they occur.

Initially then, Christians who deliberately open themselves to being anointed, filled or touched by the Holy Spirit within the ‘movement’, can receive any one of a number of gifts that can be empowered by him. The background to all this is provided in the first link above in the intro. The most common gifts available are all explained in this subsection of the website: miracle healing, prophecy, messages of knowledge and of course speaking in tongues.

2.1    Engaging with God through tongues

As I have actually seen it, and as explained in the Bible (1Corinthians 14:2), ‘tongues’ is generally a spontaneous way of praying to God. To the outsider it just sounds to be garbled gobbledygook. To the person praying in tongues, it is usually a means of expressing emotion, devotion and adoration to God. But on occasions, it can carry a message, maybe to a fellowship in church. (And I will get to that later.)

The ‘words’ or sounds as such are not chosen, and they flow from one’s literally, uncontrollably fluttering tongue.

Bear in mind that the people who have been given this gift did not have a clue about how to pray like this, i.e. before they received it. It is a common gift of the Spirit. And I can only imagine the degree of ‘belief building’ power it delivers to those people blessed by the Spirit in this way.

Other ‘anointed’ Christians can be gifted by the Spirit with the ability to interpret the sound of tongues when uttered within a congregation. They will explain the meaning of the message to other people present. I have only ever met one such Christian mind you. I was impressed, just let me say that much! That message seriously made sense … real ‘wake up’ material … when it happened.

So, the brief explanation above is about the regular old ‘tongues’ that can normally be heard in the average church within the ‘movement’. But, there is a more advanced type of speaking in tongues, that I have personally not been exposed to. And it makes sense that it is genuine today, within the movement, because the Bible reports its use during an important event after Jesus’ death (Acts 2:1-13).

And I admit here I would not normally report outcomes from gifts that I have not witnessed myself.

But one of my team of advisors, who has spent far more time in the movement than me, told me that this gift is indeed still empowered by the Spirit on occasions. In effect, people with this type of tongues, can actually speak in some language that is totally foreign to them. So, they speak in words that they do not understand themselves, as they form in their minds. And their words are obviously understood by another person: who is fluent with that language, who is present before them.

The words ‘uttered’ will, without a doubt, be a one-on-one and personal message to the listening person. (The Spirit will have placed the message in the gifted person’s mind to be spoken.) The person receiving it will know exactly what it means and … trust me on this … they will know WHO caused the message (i.e. God). I cannot imagine any outcome other than they will be ‘rattled’ to the core by what has just happened to them!

To those of us, who do not possess the ‘plain old’ gift of tongues, there is no real ‘belief building’ evidence available to us when we hear it ‘uttered’ by others. We cannot, I guess, even know whether the person uttering in tongues is faking it. Of course, if we are on the receiving end of the foreign language version, well, that could be a ‘brain snapper!’

But, if any of us do receive the gift, after being touched (filled or anointed) by the Spirit, well … the incredible special-ness of it would be impressed on us eh?

So, in itself, tongues as normally heard in church services in the movement, when experienced in isolation from any other Holy Spirit stuff, may not offer any solid evidence of God’s presence. That is to a beginner Christian or an unbeliever. But, on the other hand, its ‘genuine’ manifestation in a fellowship should have significance. It normally indicates that other gifts, which can more readily demonstrate the Spirit’s presence, are available there.

Other ‘gifts’, that are more likely to ‘rock your socks’ are described, with examples, in other articles within this “Gifts of the Spirit” subsection of the website. Please see the Menu Bar above.

The following article, “Is this Spirit stuff real?” actually shows the results of my overall evaluation of gifts, and the sensations of being touched by the Spirit.  Hopefully you the reader can use it to guide you in your own analysis and evaluation within the movement.

facebook forum
Too good to be true?Can I really believe in God?Framework for evidenceWhat does faith offer us ???

WEBSITE: Who put it together? How was it developed? Why was it built? Who or what is "I AM"?