Religion and science are not in conflict.
The two do not even need to be compared.
A true comparison does not challenge belief in God at all. 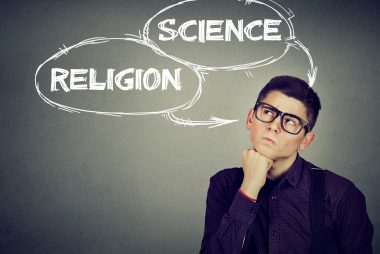 A good proportion of society considers that science and religion are in conflict with each other. In fact that suspicion alone prevents many a person from trying Christian faith for themselves.

Let me say firstly that there is no reason why the two even need to be compared. I am definitely not the first person to reach this conclusion! Science attempts to explain how things work. Religion, on the other hand, answers the big questions that begin with the word why?

I consider that many unbelievers struggle with this ‘supposed’ conflict because of the views of Christian fundamentalists. In essence this comes from the fundamentalists’ literal translation of the first Book of the Old Testament of the Bible, “Genesis”. With such an outlook, any scientific theory that challenges their views is taken as a threat to their very faith. It was the case when Copernicus theorised during the 1500s that the Earth revolved around the Sun. Darwin’s theory of evolution creates the same zealous response today!

Look, I do absolutely accept that the fundamentalists have a right to their views. And I do have the odd dear friend who is actually a fundamentalist. I have worshipped with fundamentalists too. Look, I admire their zeal and enjoy taking part in their church services, however I just DO NOT agree with their interpretations of the Bible.

None-the-less it all seems so simple to me! Faith can ‘stand on its own two feet’.

Indeed scientific evidence or theory should never affect the basis of our faith. As far as I am concerned, the existence of God can be proven, beyond reasonable doubt, by any person who is willing to truly ‘evaluate the possibility‘. That is by putting faith to the test. I am sure that the presence of God, ‘within his Church‘ and ‘our individual lives‘, can be recognised by anybody if they know how and where to look. (To read about the ‘who’, ‘how’ and ‘why’ of this website please click here.)

Of course once we have proven to ourselves that faith has a sound basis, then we will inevitably progress to believing that God has to be the universe’s creator. (Mind you, I’m not talking about doing it all in 7 days … Nah!)

With this outlook of God as the universe’s creator, scientific theory then is, as Isaac Newton believed, just the mechanism for explaining how God’s ‘creation’ actually functions!

Essentially, as a result, science should never stand in the way of a quest for personal faith. On the other hand, neither should religious views impact the development of scientific theory. Science and religion should have their own separate paths.

That all aside, the real conflict expected by so many people just is NOT there! It might have been true in the case of pre-twentieth century classical physics.

Despite his best intentions, Sir Isaac Newton (1643 – 1727), more than any other person, is responsible for the outlook that is held by a large proportion of Western atheists. The Newtonian idea of a ‘machine-like’ reality that has cranked on forever, raises the question, “Why do we need a Creator (God) at all?” That is, why do we need to theorise about a God?

HOWEVER, within current scientific theory the universe is actually known to be anything but machine-like!

It is also most unlikely that the universe has been in existence forever.

The science of the twentieth century – including the theories of relativity and, more importantly, quantum physics – still raises more questions on the ‘basis of reality’ than it answers.

One of the oddest scientific theories is that of  “non-local effects”. As an example analogy, a billiard ball will react when it is struck by another billiard ball. Once the two balls have separated and lost speed, neither ball can affect the other, that is unless they are physically brought into contact again. But within quantum mechanics, two sub atomic particles that have interrelated locally (say within an atom) can continue to influence each other through ‘non-local’ effects after separation. Measurements taken of one of these particles will be partially affected by the state of the other particle, even if it is on the other side of the universe. And the effect will be instantaneous.

Even Einstein struggled with that one at the time, but experimentation in the 1980s proved beyond doubt that non-local effects are real at a sub atomic level.

Yes, there is a lot more mystery in matter than initially imagined by most of us. Please note that I am merely trying here to ‘set the stage‘ for what follows under this subsection of the website. Just click on the subheadings under “Science and religion” in the Menu Bar above.

Firstly, there is no real need for science and religion to be compared at all.

Importantly, it is absolutely possible for ‘thinkers’ to ‘believe in God‘. In fact this website has been developed by one thinker who does believe, with the aim of helping other thinkers to do the same. Yes, the site is a guide on how this can be achieved. Of course I had a lot of help, from a team of highly qualified advisers, during the site’s development.  (Again read about the ‘who’, ‘how’ and ‘why’ of this website please click here.)

Before moving on though, maybe you would like to look at the big questions that do arise when we consider the universe and life on Earth:

If so, please continue to the following article, “Life, the universe and everything”.

The final article in this subsection of the website, “The answer”  offers a way forward in light of ‘the big picture’ highlighted here.