Jesus as the human embodiment of God’s unlimited
and unconditional love for us.
Jesus rescued us from our wrongdoings, our sins.
Jesus’ death paid the price. 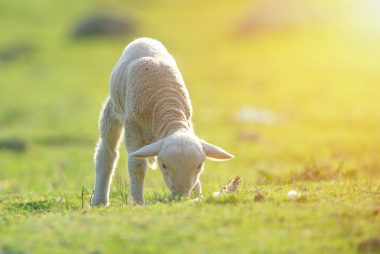 It is recommended that readers should first gain a quick overview of Christianity by accessing the leading article of this section of the website, “Christianity explained”, before reading this article.

The actual term, “Lamb of God” has its origin in the Bible’s Old Testament (the pre-Jesus part of the Bible, also relevant to the Jewish religion). The Jewish Passover festival, which is still practised by Jews, celebrates how God rescued them from slavery in Egypt. Originally, the blood of slaughtered lambs was used by the Jews to protect the lives of their newborn.

God had threatened to bring deadly action upon the Egyptians’ children if the Jews were not freed from slavery. The sign of lambs’ blood upon the doorways, to Jewish households, saved their children from that same action as it swept through the land of Egypt.

The custom of slaughtering/ sacrificing lambs, and then feasting upon them, has continued on as part of the Jewish festival.

We are told in the New Testament (the actual Jesus bits of the Bible) that Jesus had celebrated the Jewish Passover festival just before he was arrested for sentencing and eventual death by crucifixion. Jesus’ death on the cross, due to its timing on or around the Passover, is understood by Christians as a ‘symbolic analogy’ to the Jewish sacrificial lamb.

Christians therefore believe that Easter has a similar meaning for them as the Passover had meant for the Jews. That is they are rescued from their sins by Jesus’ death on the cross, making him the sacrificial “Lamb of God”. The article, “Justified and saved by grace” explains how Christians are saved from eternal death through God’s grace (which is, in the context of this article, ‘entwined’ with Jesus’ self sacrifice for us).

Jesus can then rightly be seen as God’s ‘sacrificial lamb’. However, we as Christians need to think even beyond this. We need to understand that although Jesus may be ‘one’ with the same God worshipped by the followers of all monotheist religions (Judaism, Christianity and Islam), it is through Jesus as ‘the Word‘ and as a ‘person of the Holy Trinity‘ that we see him in a new and VERY special way. At that stage, we come to see Jesus as the embodiment of God’s unconditional love and self sacrifice for his children (i.e. us).